I opened the door and there she sat
on my front porch, a Fat Black Cat.
Since Halloween’s not far away
I decided that she could stay
An addition to my fun décor
A Fat Black Cat at my front door.

I really thought by the next day
She would have scampered far away.

But as I opened up the door
She had added to my décor
A big Fat Rat with a pink tail
Of course I let out quite a YELL!
She was not bothered by me much.
She simply said “It’s just my lunch.”
I really thought by the next day
She would have scampered far away But as I opened up my door
She had added to my décor
A Large Black Spider in a Web
“He’s just a friend,” is all she said.
“He might stay for a day
Or he might simply go away.”

They both were there and there was more!

She had procured a great big SNAKE
Dead of course, but still a SNAKE!
“He bothered me.” was all she said
As she daintily cleaned her head.

I really HOPED by the next day
THEY would have scampered FAR away. 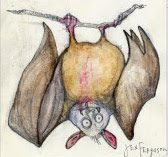 But when I Opened up my door
There was more there than before.
A Bat was hanging from the eaves.
She growled and said. “I am not pleased.
I chased him all night through the trees.
He just won’t go. He’s such a tease!”

I really HOPED by the next day
They would ALL have gone far away! 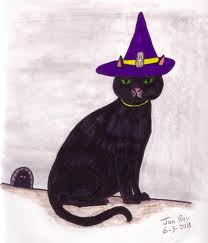 But when I opened up my door
There was a surprise for sure!
The Cat had donned a Pointed Hat
And a cape was draped upon her back.
She smiled at me “Don’t I look dandy?
Maybe I will get some candy?”
Halloween night was finally here!
No one would come to my house this year
I thought as I looked out the door
At my unusual décor.
They would all be scared and run away
That cat had ruined my favorite day?
As I climbed into my bed
Costumed kids danced in my head
At least I’d see them in my dreams..
Then suddenly the doorbell rings!
I jumped and scampered to the door
And there I was surprised once more.

I opened the door and there she sat
The Fat Black Cat with the pointy hat.
Goblins and ghosts petted her fur
They gave her candy as she purred
Your house’s the best I heard them scream.
And as they ran off,  I know I’d seen
What will be MY BEST, HALLOWEEN!
I thought that she was here to stay
But she had vanished the next day
Gone was the Spider and the Bat
Gone was the Snake and the fat Rat
I really hope she will come back
Next Halloween, my Fat Black Cat!
Copyright By Cathy Lea Collar 10/11/2011
Posted by C. L. Collar at 11:29 PM