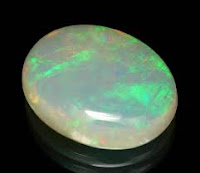 Australian Aborigines believe they have lived in Australia since the dawn of creation. They view the opal as a spiritual stone, and their culture contains a wealth of mythology about opals. They claim the opal was left behind by an ancestor to symbolise his or her presence. One legend claims the Creator used a rainbow to come to Earth with a message of peace to all mankind. At the place where his foot touched the ground the stones became alive with opals, sparkling with all the colours of the rainbow.
Posted by C. L. Collar at 9:07 AM