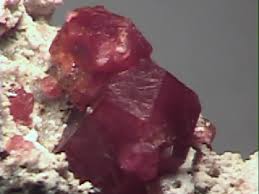 Garnet is Birthstone for January and the stone that celebrates the 2nd anniversary of Marriage . The name “garnet” comes from the Latin word “Garanatus,” meaning “seedlike,” in reference to a pomegranate.

Throughout time, there have been many ancient traditions and legends about the garnet. In Medieval Times,  the stones were thought to cure depression, protect against bad dreams, and relieve diseases of the liver, as well as hemorrhages.

According to legend, Noah used a finely cut, glowing garnet to illuminate the ark during those dark wet days and nights. Hebrew writers include the garnet as one of the twelve gems in Aaron’s breastplate. Christian tradition considered the blood-red garnet as a symbol of Christ’s sacrifice.

Moreover, Garnet is symbolic of a quick return and separated love, since Hades had given a pomegranate to Persephone before she left him to ensure her speedy return. Therefore, Garnet may be given to a beloved before embarking on a trip, as it is believed to heal the broken bonds of lovers.

Brought to you by Anna's Legacy Gift Shop @ https://www.etsy.com/shop/AnnasLegacyGiftShop?ref=hdr_shop_menu