A Special Gift
In Memory of My Special Angel
Anna 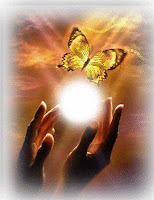 By Cathy Collar
The softly glowing orb floated through the dark, silent night.  Her light rivaled that of the moon.  She was told she could not go.  Could not make this trip from heaven to Earth.  She was too young, too newly an angel, but in her heart she knew she had to come.  It would be her first Christmas away from her earthly family and she must be there.  They had to know that she was all right. That she was happy and a part of her would always be with them.  The new angel wasn’t sure how she was going to accomplish this, but she was determined and with the help of God, he would help her, he’d understand, she would find a way.
She floated looking for any sign that she was in the right place.  Her journey had disoriented her a bit and she really wasn’t accustomed to her new form.  The frozen ground reflected her glow, lighting her way through the brisk night. She did not feel the cold.  The glowing warmth that God had bestowed upon her filled her whole being.
There it was, her earthly home.  No Christmas lights outside this year.  The sight saddened her a little.  Her mother loved Christmas and always decorated the house and yard with thousands of brilliant lights. The Nativity Scene hadn’t even been set out.  But she understood why.  Her family really didn’t feel the Christmas joy this year because they were missing her.
Determined to let them know that she was gloriously happy, she slipped into the house.  A dream vision would be the easiest way to talk to them.  Her grandpa’s sister, Shellia had passed at the tender age of nine.  She had become the new angel’s very special friend and taught her a few simple angel tricks, how to pass through walls and not knock yourself out in the process, how to make things glow and how to enter a dream.  The new angel said a silent prayer.  Please God help me get this right.  Her inner glow grew a little warmer.  She smiled.  He was with her on her quest.
She floated to her parent’s bedroom.  The sadness and grief almost knocked her down.  She must fight her way past this.  She had been warned this would be her biggest enemy in getting through to them.
“It will be all right.  I am with you.  I will give you the strength you need.”
The voice softly blended with her whole being.  Fortified, she bolted forward, through the fog of despair that barred the entry into the room.
First, would be her mom.  She would be easier to reach.  Her mind was open to the thought that her daughter would contact her in some way.  Her mom had prayed for it.  The new angel pausing studied her mother’s face.  Dark circles appeared under her eyes, evidence of unending tears that had been shed.  Yes, this was the right thing to do.  She must vanish the doubt in her mother’s mind.  Softly she hovered over her mom’s heart.  She had already planned the dream that would be implanted there.  Her thought formed and pushed its way gently in, a glowing white angel with feathery wings, basking in a brilliant light and her smiling face looking into her mother’s eyes.  The young angel watched as her mother’s grief lifted a little and a smile spread on her lips.
She drifted to her dad.  She knew he would be more difficult.  He was trying so hard to be the strong one.  As always, he thought he had to be the rock for all to lean on.  She felt his enormous pain.  He held inside all of his suffering and grief.  It was so vast.  She knew she had to push her way past and find the soft spot underneath.  Try as she might, her thoughts would not break through.  What would she do now?  The soft, calm voice was back.
“You must enter his heart.  I will help you.”
With a surge of light, the new angel battled through the hard shield her father and built.  Thump, thump, she was in!  She had thought about his dream very carefully.  It had to be simple, yet strong enough for him to believe.  The thought formed.  A blue sky covered with dark clouds.  The clouds represented her fears and problems on earth.  Now the clouds would part to a blazing sun, her bright new world.  He was a being of nature and would understand this dreams’ meaning.  Struggling back through the shield, she forced her way out.   She watched as his face transformed from tension and strain into a state of satisfied calmness.
Hovering above her parents, she soaked in their love.  She hated to go, but her work here was done.  If she stayed any longer, it would be harder for them to move on.
“I will visit you often,” she whispered drifting out of the room.
She paused at the sight of the familiar Christmas tree standing in its usual spot in the living room.  She took in all of the homemade ornaments and twinkling lights.  Her eyes followed them to the top, where she knew the beautiful Christmas Angel would stand.  Oh no!  Something was wrong.  The Christmas Angel's candles, held in her hands were not lit!  This just wouldn’t do!
“Here is my Christmas present to all of you,” she said.  The candles began to glow then blossomed into a brilliant light. “Merry Christmas!  I love you all dearly!”
Floating back to heaven, the new angel felt a great worry lift from her soul.  She knew her message had gotten through.  Now she must move on to her new life.
Posted by C. L. Collar at 11:43 AM