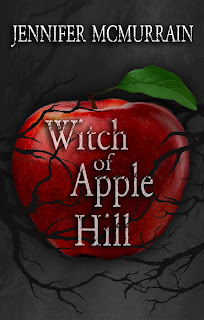 “Were any of the other ladies who got a new color today descendants of the founding families?” asked Mrs. Welch.
“No,” Heather answered weakly.
Mrs. Welch folded her hands and said matter-of-factly. “It’s the curse.”
The town hall erupted in mummers and Elise overhead both the words “crazy” and “she’s got a point” running through the crowd.
“That’s an awful big smile for such an odd situation,” Cage whispered into her ear and Elise swallowed the large grin.
“I just find it amusing that she believes in curses,” stated Elise.
“Now, I find that amusing,” said Cage.
Elise furrowed her brows at the man. He was so strange and she didn’t like it. It was as if he could see right through her. It was as if he could tell she was a witch. Her mind floated to what Rosemary had said about Cage being a warlock. She leaned in a little closer, trying to catch a whiff of magic, but felt nothing. He didn’t seem to be a warlock. Her mind raced with possibilities until one barreled to the forefront.
Cage Martin was a hunter.

“You can’t possibly believe he’s a hunter,” stated Rosemary.
Elise had hurried out of the town hall meeting as soon as Mayor Garver had banged the gavel and declared the meeting over due to insanity and gone straight to the library. She couldn’t blame him, after Mrs. Welch’s speech, there was not going back to the normal itinerary. As she had fled out the door, she could hear Mrs. Welch ordering the founding families to lock their doors through Halloween and if they were lucky, they might just live to tell about it.
Elise had scoffed at the notice. Of course they would live, but they just might not enjoy that life, which was the point of the curse. She wanted them gone, all of them, founding families or not.
“I do,” said Elise, as she walked behind the circulation desk and pressed a button. She then walked into the small sorting room and pushed on the wall. A secret door opened revealing another hundred or so books. This secret room held Elise’s treasured grimoire collection.
Of course, she had her family’s trusted spell book, but she also bought every authentic grimoire she could find in used bookstores and off the internet. The sad truth was the family heirlooms were often sold in ignorance. Elise held on to each book and cherished it, hoping the owners were want it returned someday to carry on their own family’s legacy. The sad truth was, very seldom did she get requests for the grimoires to be returned.
She shook the sad thought away. She couldn’t worry about other magical families losing their spell books right now. If she had a hunter in her town, then she needed to be prepared.
“Elise, you have to talk to me,” said Rosemary.
“No, she doesn’t,” said Ernest floating into the secret library. “If there’s a hunter here she needs to get rid of him and fast. He’ll kill her and us, so to speak, if she doesn’t do something.”
“Then why didn’t he kill us the other day when he was in here?” asked Rosemary. “We were all off-guard, it would have been easy for him.”