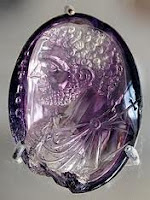 Amethyst has been a prized gem for centuries. It is the birthstone for Pisces and the month of February, and the gemstone for the 6th anniversary of marriage. The stone is included in royal collections all over the world, from ancient Egypt to the British crown jewels. The Smithsonian has an amethyst that weighs 400 pounds! Ancient civilizations prized the stone more than many gems, which today, enjoy more recognition and value, including the Sapphire and the Ruby. In olden times, Amethyst saw its place in the Christian church, worn on Bishops’ rings. The royal purple color used to symbolize Christ. Saint Valentine was thought to wear a ring set with an antique Amethyst carved with an image of Cupid. The stone is also a symbol of Saint Matthias. There are a number of Biblical references to the amethyst. It was also one of the twelve precious stones in the high priest Aaron’s breastplate. The twelfth foundation of the Holy City was built of amethyst. For some time, true amethyst was valued equally with the diamond. Then great finds in South America and elsewhere made it more plentiful. As its rarity decreased, so did its price.
Brought to you by
Anna's Legacy Jewelry @ www.annaslegacy.com
http://www.jewelsforme.com/amethyst-history.asp
Posted by C. L. Collar at 5:50 PM