Stone Magic ~ The Spirit Within 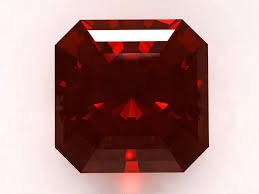 The King of Saxony is said to have had a garnet of over 465 carats. Plato had his portrait engraved on a garnet by a Roman engraver. Bohemia, now a part of Czechoslovakia, was once a tremendous source of garnet, and at one time, cutting, polishing, and mounting garnets was a very rich industry in that country. Many Bohemian castles and churches had magnificent interiors decorated with garnet. Bohemian garnets are famous even today, known for their small but beautiful stones set close to each other
resembling a pomegranate. Garnet jewelry is still found in the Czech Republic, with the stones still arranged in the traditional, tightly joined way. This ensures that the attraction of the classical Garnet pieces is caused only by the beauty of its stones. The Anglo-Saxons were also fond of garnets. Their jewelry was set with garnets mounted in many forms.
Brought to you by Anna's Legacy
Jewelry https://www.facebook.com/annas.legacy/media_set?set=a.10202630477504540.1073741830.1275615078&type=3

http://www.jewelsforme.com/garnet-history.asp
Posted by C. L. Collar at 12:00 AM