Being pregnant is never easy, but it is especially hard for a first timer. You can read all the pregnancy books in the world and still not know what to expect. What to Expect While You’re Expecting should be named What You Should Expect While You’re Expecting, but There Will Be A Million Other Things That Happen That We Won’t Tell You To Expect. As a librarian I can see how that title is a little long, but it’s definitely more accurate.

As I enter my 33rd week of pregnancy I have become of bit of a hypochondriac. Every new ache, pain and even a few new gurgles send me flying to the internet in search of answers. Most of the time there is a logical, normal answer for what I’m experiencing, absolutely nothing to worry about. 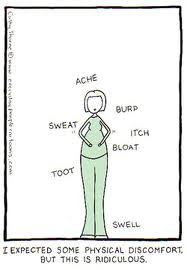 So when I started experiencing sporadic lower back pain last Saturday at work, I calmly opened a Google search for answers. Imagine my surprise when lower back pain was on the symptoms to NOT ignore while eight months prego. Because it was so sporadic I played it off as Braxton Hicks contractions and continued my work day.

Upon arriving home I sat in our new recycler, changing positions frequently trying to get the little buggers to stop. The pain only intensified. During my pervious Google search it had stated that taking a walk would more than likely stop the Braxton Hicks. Just my luck SunFest was happening at the park a few blocks away from our house and I was craving a snow cone. Grabbing my hubby I announced it was time to walk the pregnant lady to the park in search of a snow cone and relief from current back pain. You notice the snow cone came first, I have my priorities straight. 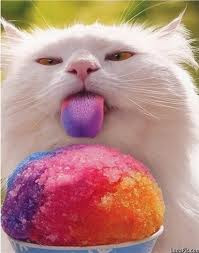 As we walked the contractions moved from the back to the front. I complained a little to my hubby, but continued on my snow cone quest. Finally, finding a snow cone booth (by the way, snow cone ice should be white not clear, hence the name “snow” cone.) I purchased my ice cone and we made our way back to the house. The more we walked the harder the contractions got, but I continued to play it off as normal. That is until we reached the front of our neighbor’s house and I had the mother of all contractions. It literally made me double over in pain.

I assured Mike I was fine and just needed to sit down. After sitting the contractions lessened in strength and move once again to my back. Of course, I immediately called my mommy and asked her advice. She felt it would be better to go to the ER and get checked out, but I hesitated. I can honestly say I was afraid of looking foolish. I didn’t have any of the other signs of labor. Mike and I both dug our heads into Google searches and decided to monitor the back contractions. They remained sporadic for the rest of the evening. Mike eventually fell asleep on the couch, laptop open, the contraction spreadsheet flashing in front of him.

Around midnight I decided it was best for us both to get some rest. The contractions continued, but I managed a light sleep until 4:30 am when the pain became so intense I could no longer ignore it. Knowing my OB/GYN didn’t have an answering service I called Labor and Delivery to get a professional opinion on my options.

The nurse was very friendly and agreed that it was more than likely Braxton Hicks, but if I was worried they’d be more than happy for me to come in so they could take a look. Basically it was up to me. I thanked her for her time, hung up the phone and let myself go into a hysterical crying fit for the next ten minutes. All I wanted was for a professional to say, “Yes, come in now” or “No, you have nothing to worry about” but the decision was mine. The first of many decisions as a Mommy I’m sure.

I calmed myself down and made myself go back to bed, vowing that if I had one more hard contraction, front or back, we’d go to the ER. I don’t really remember drifting off to sleep, but at some point I must have because before I knew it I was lying in a hospital bed receiving fluids. I look to my right and there is my Grandma Lou and at the foot of the bed is my sister, Anna. Both have passed on from this world. 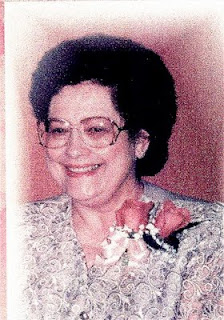 My Grandma snuggled in close and proceeded to let me know that I had rough feet. That was her special way of telling me she wasn’t a figment of my subconscious and both my Grandma and sister had made a special journey to visit me in my dream. Grandma told me that everything was going to be fine, that I was fine, and that Annaley was fine. She told me I could rest, while my sister nodded her head in agreement. Then a doctor came in, sat next to the bed, told me we were fine, and that I could open my eyes.

It was 8:30 in the morning and as far as I could tell the contractions were gone. A long awaited peace fell over me and I knew for certain that we wouldn’t be making any special trips to the hospital any time soon. I laughed to myself as I thought of my Grandma and sister looking down from Heaven as I cried hysterically, deciding I was such a mess they better tag-team the situation. 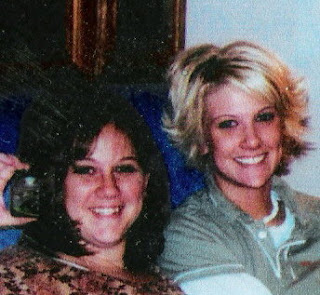 Even though my daughter will not get to know her Great Grandma Lou Anne and Aunt Anna here on Earth, I’m comforted by the fact that Annaley will be surrounded by their love and protection throughout her life. 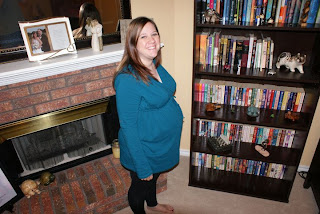 Me at 33 weeks with healthy and happy, Annaley.