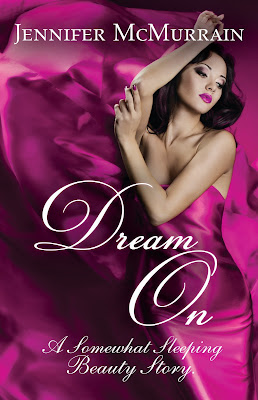 Arlyn woke to the sounds of a beeping machine and looked directly into the gray blue eyes of Cordel Foster. At first she thought she was dreaming, that he had put the honeysuckle back in her hair and that she was living her best dream.
He grabbed her hand, letting her know that it was not a dream, but very much real. She looked around and realized she was in the hospital.
“What happened?” she asked.
“I was a jerk again and you went into cataplexy and banged your head pretty good,” explained Cordel.
“How did I get here?” she wondered. “I remember you leaving.”
“I did,” admitted Cordel, “then I came back and I might have kicked in your door.”
“What?” Arlyn tried to sit up, but her head spun.
“Whoa,” said Cordel in a soft voice. “You’ve got a nasty gash and a concussion. Don’t worry about the door, I called someone to fix it right after the ambulance left. Your apartment is fine, so just concentrate on getting better.”
“You really came back?” asked Arlyn. Her head was still swimming, but now it was swimming her feelings for Cordel. “After I said those mean things, you came back?”
“I realized you were saying them to get me to go away, just as you said I would,” said Cordel. “I fell right into your trap, for a minute anyway.” He chuckled softly. “But I’m not falling for it again. First, I’m sorry I got you so worked up. It’s going to take me a while to learn how to deal with our disagreements, but I hope you’ll be patient with me.”
“Cordel we can’t,” said Arlyn.
“Yes, we can,” said Cordel, “if any two people can make this work, it’s us. Look, I’m not saying there won’t be problems, and ours may be a little more complicated than the average relationship, but I’m not willing to give up so easily. I’ve faced down poltergeists, sea monsters, and even big foot, so if you think I’m going to be scared off by a relationship that needs a little work, you don’t know me at all.”
Tears started to fall on her cheeks. She wanted so desperately to believe him, but her mind kept telling her to let him go. She could never give him what he wanted.
“I know you’re scared,” said Cordel, “and that’s okay. It’s like a roller coaster, terrifying, yet thrilling. You can’t help but keep getting on and the more you ride it, the more you realize the fun you’re having and you forget to be scared.”
“I’ve never been on a roller coaster,” said Arlyn, with a small smile.
“Then you’re in for a treat,” said Cordel, with a smile of his own. “Arlyn, don’t let fear stand in our way here. I know you have to be brave every day of your life because of your narcolepsy, let me be brave with you. Let us try.”
“Cordel,” she whispered as she took her free hand gently caressed his face. “I’m so glad you came back and not just because you got me to the hospital. I feel like you’re saving me from myself, as if you’re the hero I never knew I needed.”
She leaned in and he kissed her gently.
“Are you ready for this adventure?” she whispered softly as they broke from their embrace.
“It’ll be the greatest one I will ever go on,” answered Cordel.