Pearls ~ The Stone of New Beginnings ~ 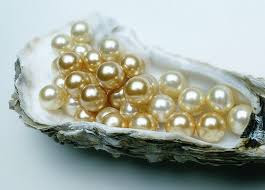 One early Chinese myth related that pearls fell from the sky when dragons fought amongst the clouds. Another myth said that pearls originated as raindrops swallowed by oysters. In one ancient tale, a boy found a miraculous pearl. When placed in a jar with just a bit of rice, it filled the jar with rice the next day. After his neighbors found out about this, they tried to steal it. The boy swallowed the pearl to protect it. As a result, he became a dragon. To this day, Chinese artworks often depict dragons guarding pear
In many ancient Asian cultures, the smooth wholeness and seemingly “magical” appearance of pearls in such lowly lifeforms as oysters indicated the presence of divinity. The pearl represented the journey of the soul or spirit along the path to perfection. In ancient burials, mourners placed pearls in the mouths of the deceased. Since pearls apparently contained the principles of life, they hoped they could assist the dead on their journeys beyond. Mourners also decorated burial gifts and clothes with pearls. This seemingly ritual act may have started as a practical act. Pearls were among the first materials used for beads. Their natural bead-like shape made them easy to use for decoration and yielded lovely results.
Information from ~ https://www.gemsociety.org/article/history-legend-pearls-gems-yore/
Posted by C. L. Collar at 12:00 AM