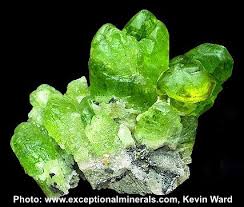 Peridot has been mined as a gemstone for thousands of years and is mentioned in the bible under Chrysolite, which was one of the stones of the twelve tribes that were imbedded in the breastplate of Aaron.

It is also said that this beautiful olive - green stone was one of the favorite gemstones of Cleopatra and that some of the so-called emeralds worn by her were actually Peridot.
Maybe Cleopatra wore this stone because it was believed that Peridot would dissolve enchantments when set in gold.

If someone wanted to use the stone for protection from evil it had to be pierced and stung through the hair of a donkey, then worn on the left arm. I doubt if Cleopatra ever wore it in this form.

Peridot unlike many gemstones is not formed in the earths crust. It is formed deeper in the Earth, in the magna in the upper mantel, about 20 to 55 miles deep. It finds it's way to the surface through tectonic or volcanic activity. It was first mined in the Topazos Islands, now known as Zabargad or St. John's Island. Peridot has been mined from this island for over 3,500 years. This Island's exact location was lost for several years and was only rediscovered in 1905. The tiny island, often shrouded in fog, is located about 35 miles off the Egyptian coastal port of Berenica.
By C.L. Collar

Brought to you by Anna's Legacy Jewelry @www.mystiquestonemagic.blogspot.com
Posted by C. L. Collar at 11:56 AM