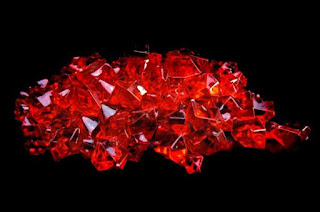 Red is the color of our most intense emotions—love and anger, passion and fury. It’s associated with objects of power and desire—like fast cars and red roses. Early cultures treasured rubies for their similarity to the redness of the blood that flowed through their veins, and believed that rubies held the power of life.

Ruby is one of the most historically significant colored stones. Rubies are mentioned four times in the Bible, in association with attributes like beauty and wisdom. In the ancient language of Sanskrit, ruby is called ratnaraj, or “king of precious stones.”

In the first century AD, the Roman scholar Pliny included rubies in his Natural History, describing their hardness and density. Ancient Hindus believed that those who offered fine rubies to the god Krishna were granted rebirth as emperors.


Brought to you by Anna's Legacy Jewelry @mystiquestonemagic.blogspot.com
http://www.gia.edu/ruby-history-lore
Posted by C. L. Collar at 12:00 AM