If you were born this month you are an Exotic Emerald! 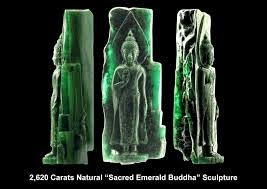 Emerald" The Stone Of Divine Love "
I guard your heart's essence. I compel you to function at your highest level ensuring that you walk an illuminated path with the brilliance of love as your guide.

Emerald’s lush green has soothed souls and excited imaginations since antiquity. Its name comes from the ancient Greek word for green, “smaragdus.” Rome’s Pliny the Elder described emerald in his Natural History, published in the first century AD: “…nothing greens greener” was his verdict. He described the use of emerald by early lapidaries, who “have no better method of restoring their eyes than by looking at the emerald, its soft, green color comforting and removing their weariness and lassitude.” Even today, the color green is known to relieve stress and eye strain.

There are other green gems, like tourmaline and peridot, but emerald is the one that’s always associated with the lushest landscapes and the richest greens. Ireland is the Emerald Isle. Seattle, in the US state of Washington, is the Emerald City. Thailand’s most sacred religious icon is called the Emerald Buddha, even though it’s carved from green jadeite.